This author has not yet filled in any details.
So far Natalie Arrowood has created 28 blog entries.

Coca-Cola Consolidated, Charlotte FC and Harris Teeter have a history of honoring the service and sacrifice of active-duty military members, veterans, and their families. 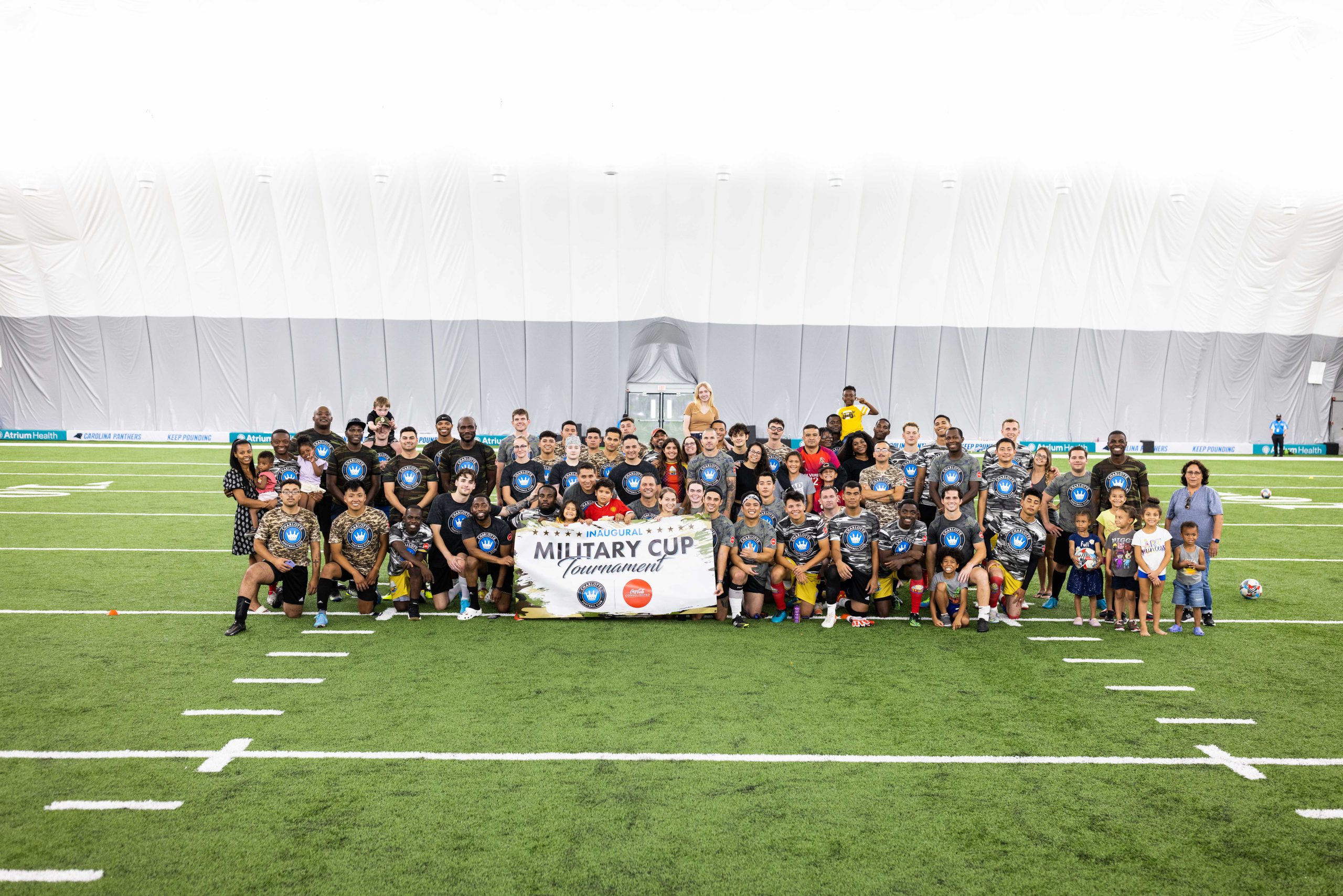 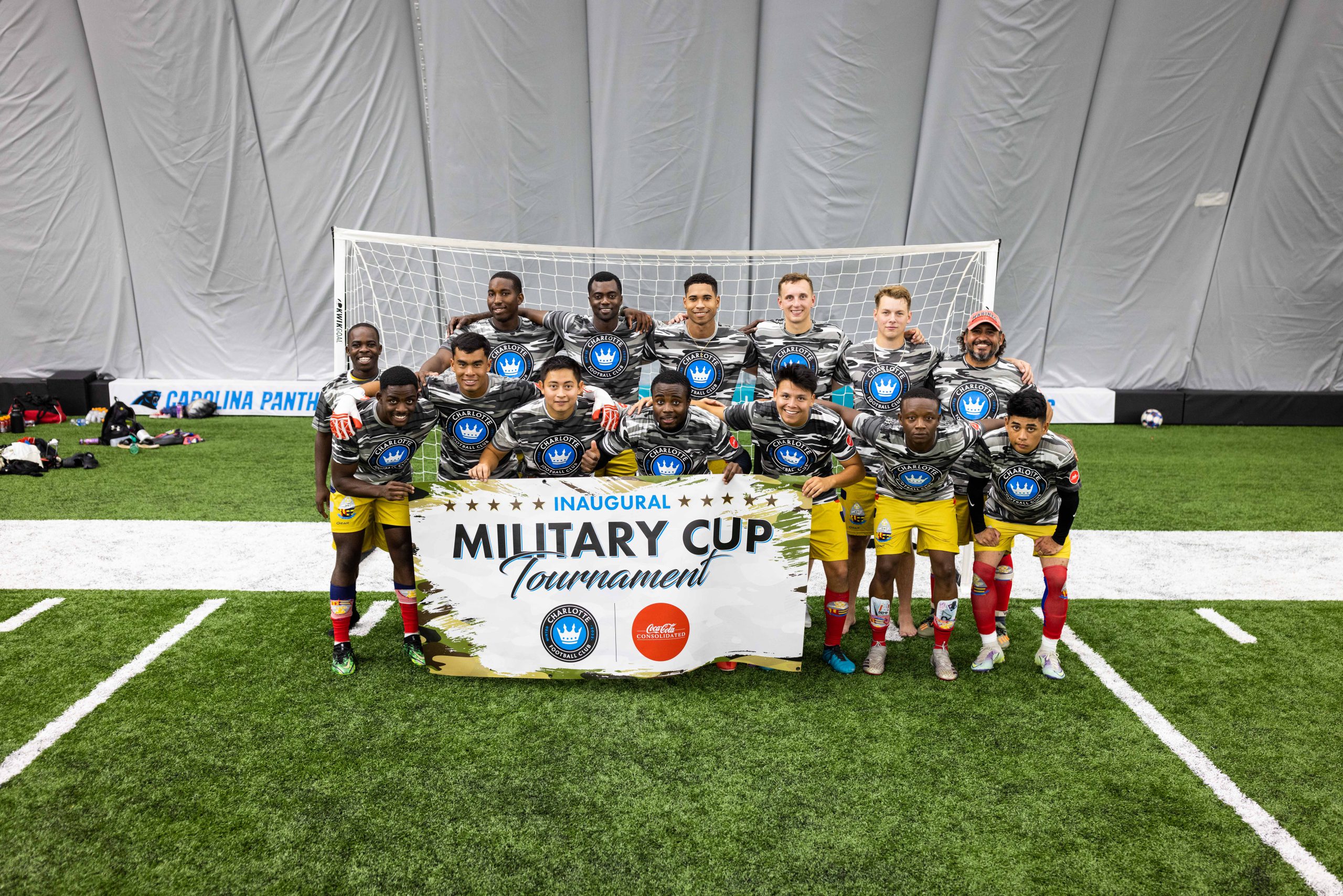 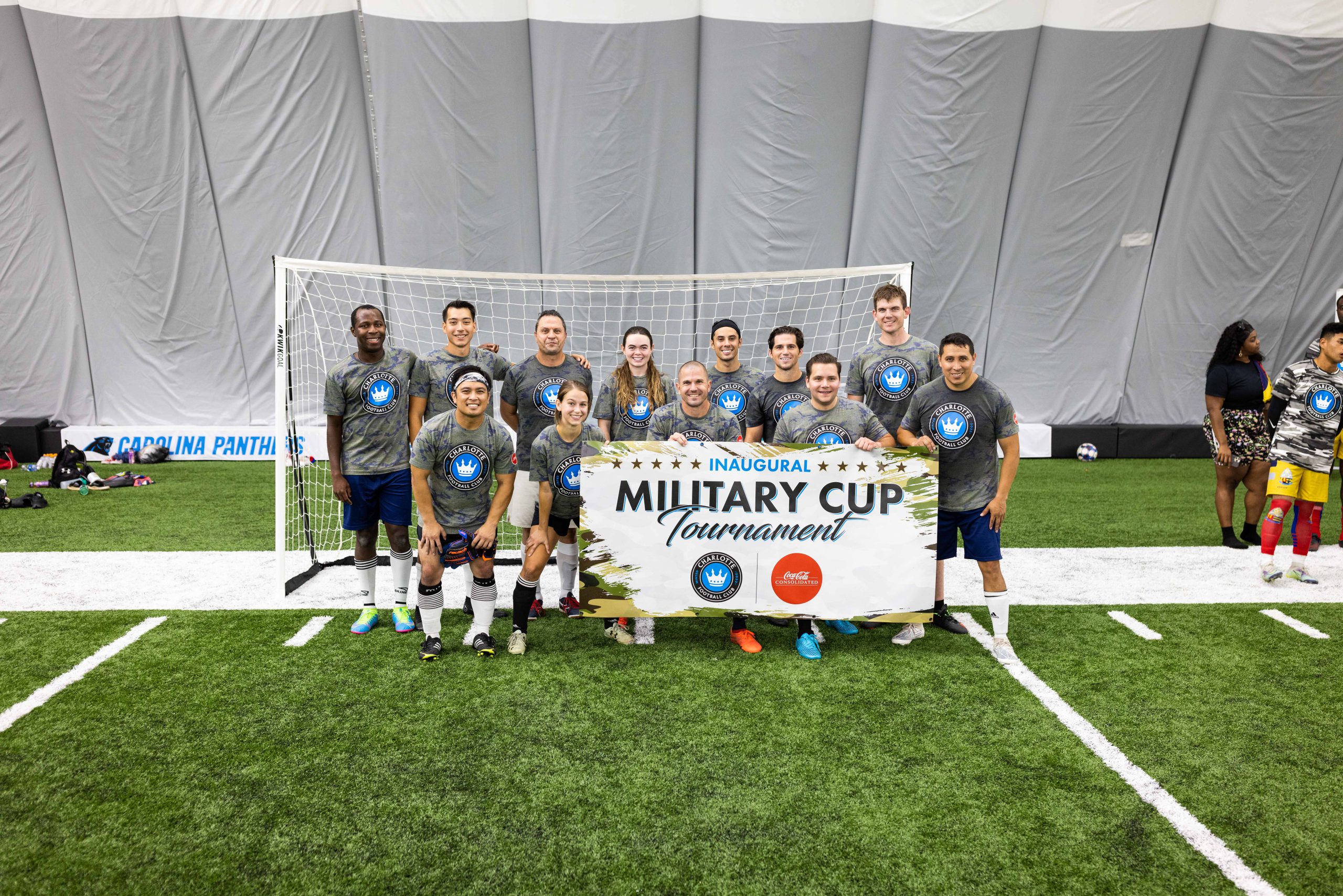 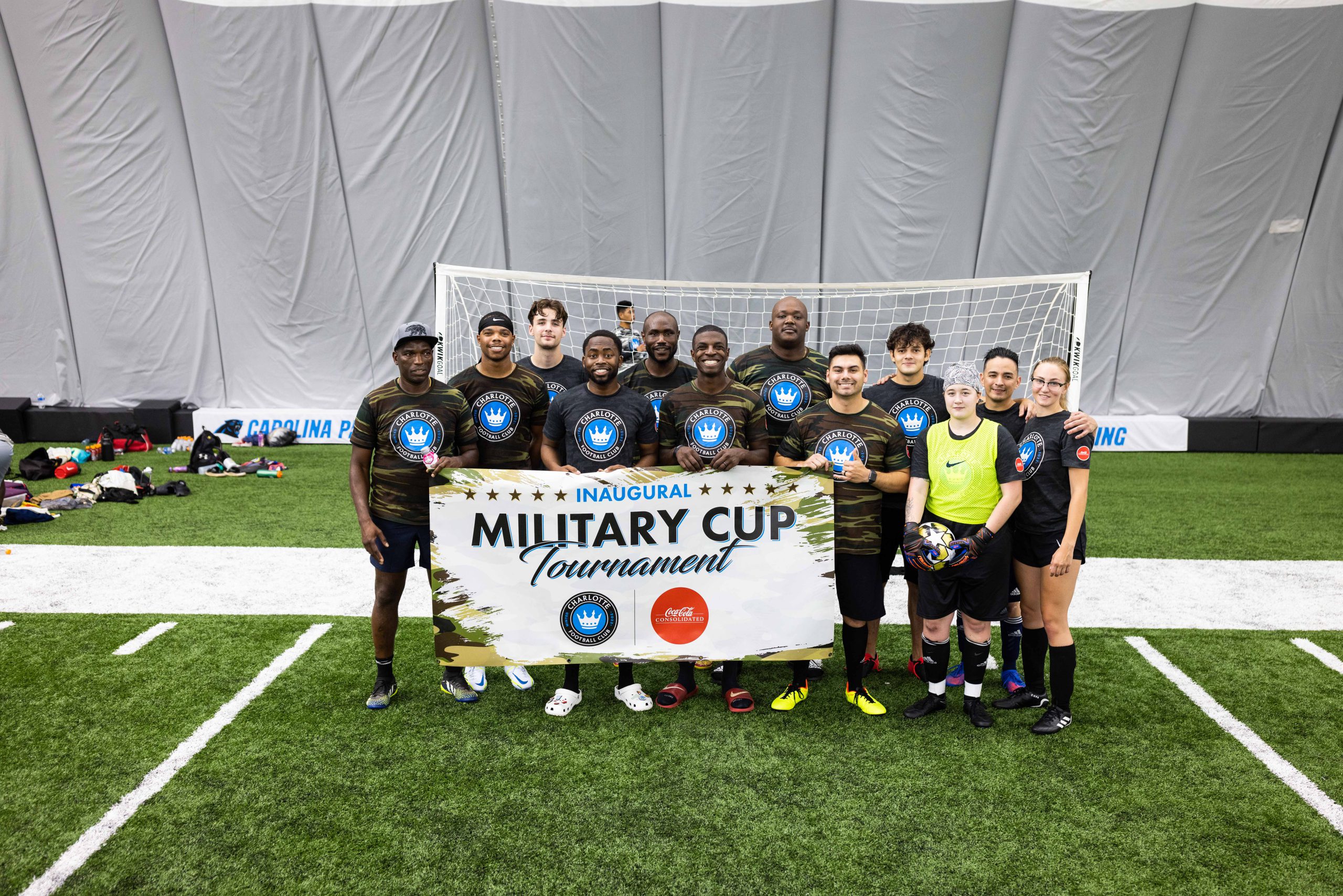 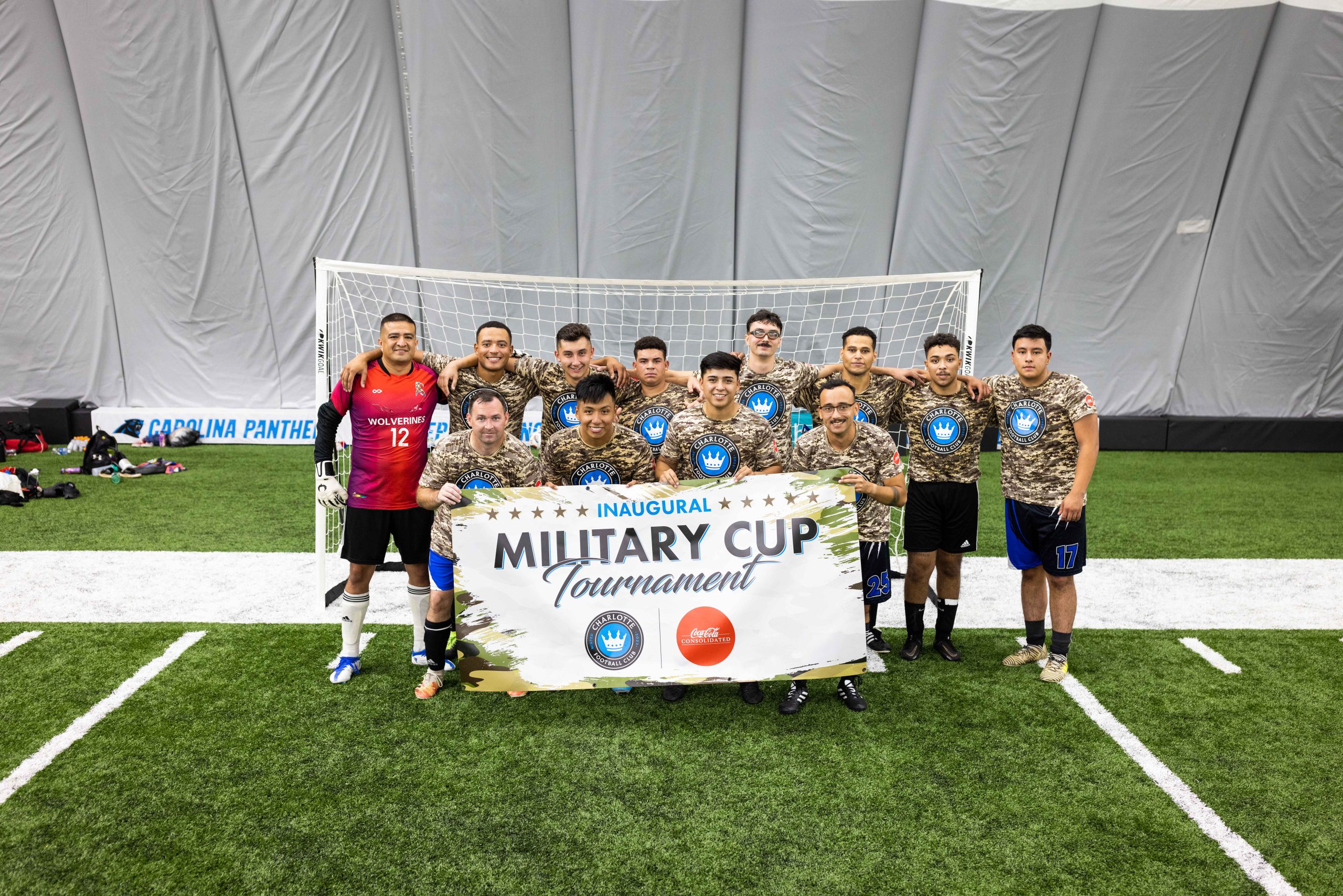 Coca-Cola Consolidated, in partnership with Nashville SC, BODYARMOR, and Kroger hosted a back-to-school event at Carter Lawrence Elementary School located in the Edgehill neighborhood of Nashville.

BODYARMOR, Coca-Cola Consolidated and Kroger donated approximately 200 backpacks filled with school supplies to Carter Lawrence Elementary students and an additional 100 backpacks to kids in the community as they prepare for the start of the 2022-23 school year. Totes filled with supplies for the school’s teachers were also provided by Coca-Cola Consolidated. Additionally, BODYARMOR donated $5,000 to Carter Lawrence Elementary School that will enable them to elevate students’ education experience through field trips, guest speakers, assemblies and engineering clubs. 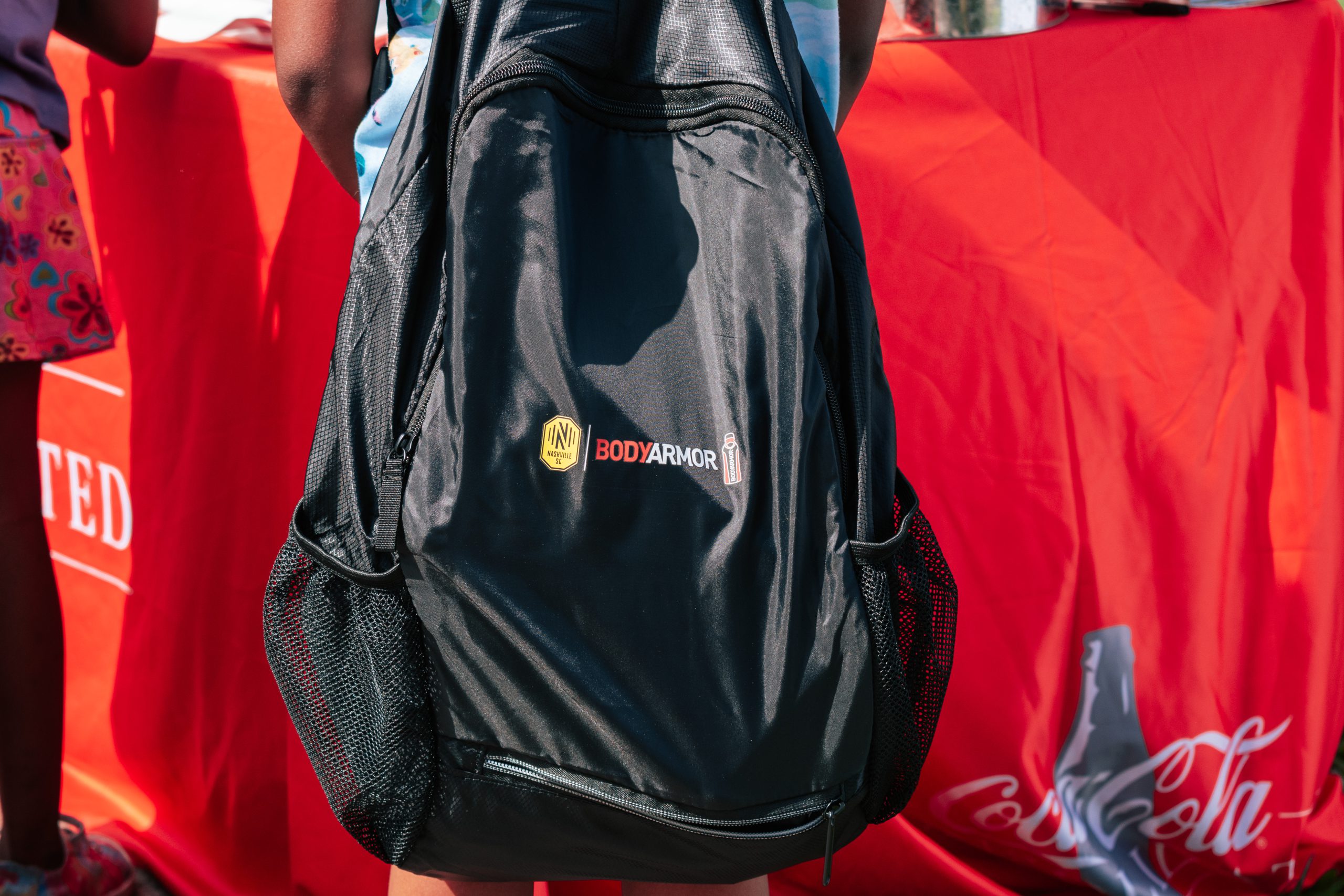 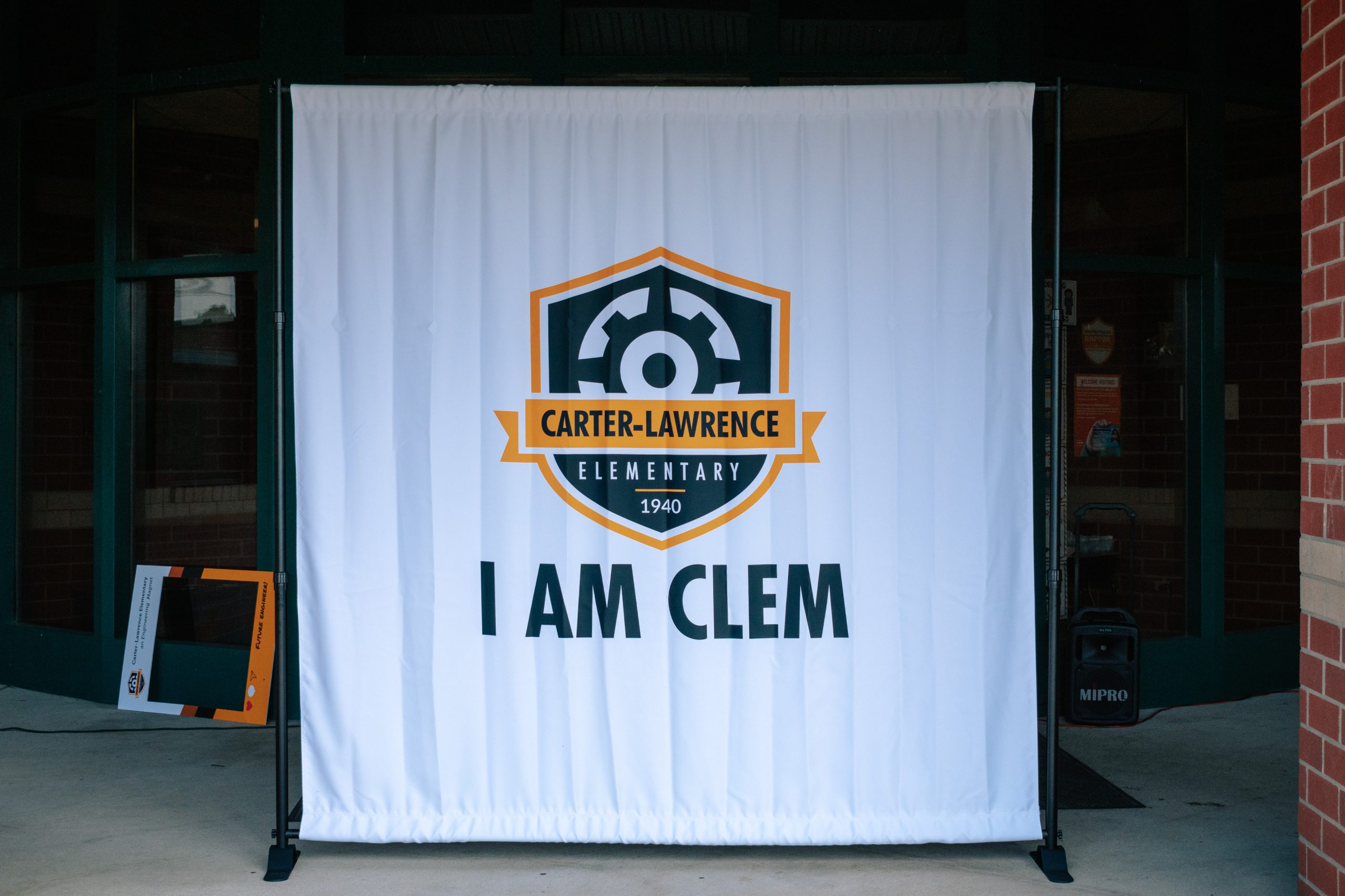 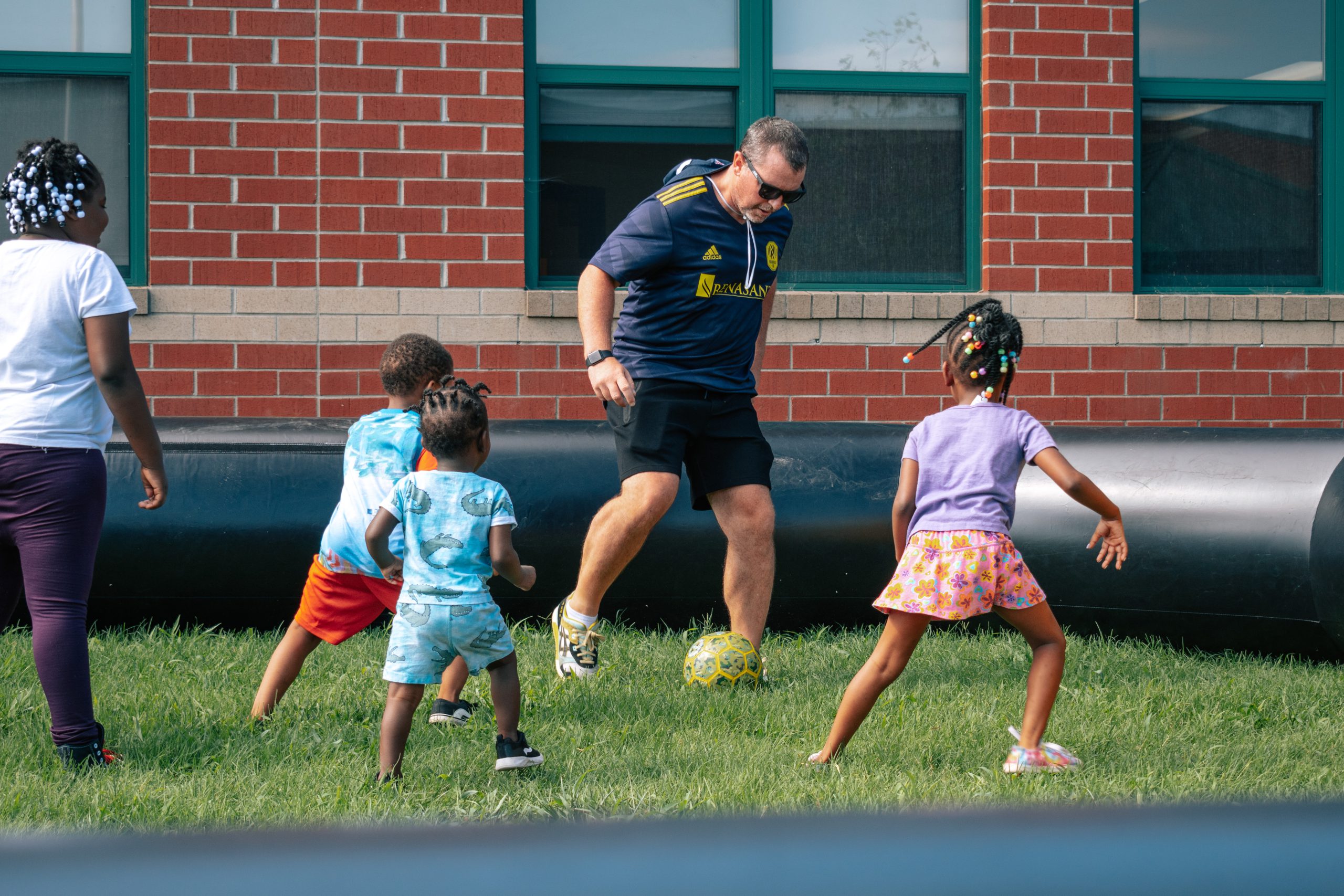 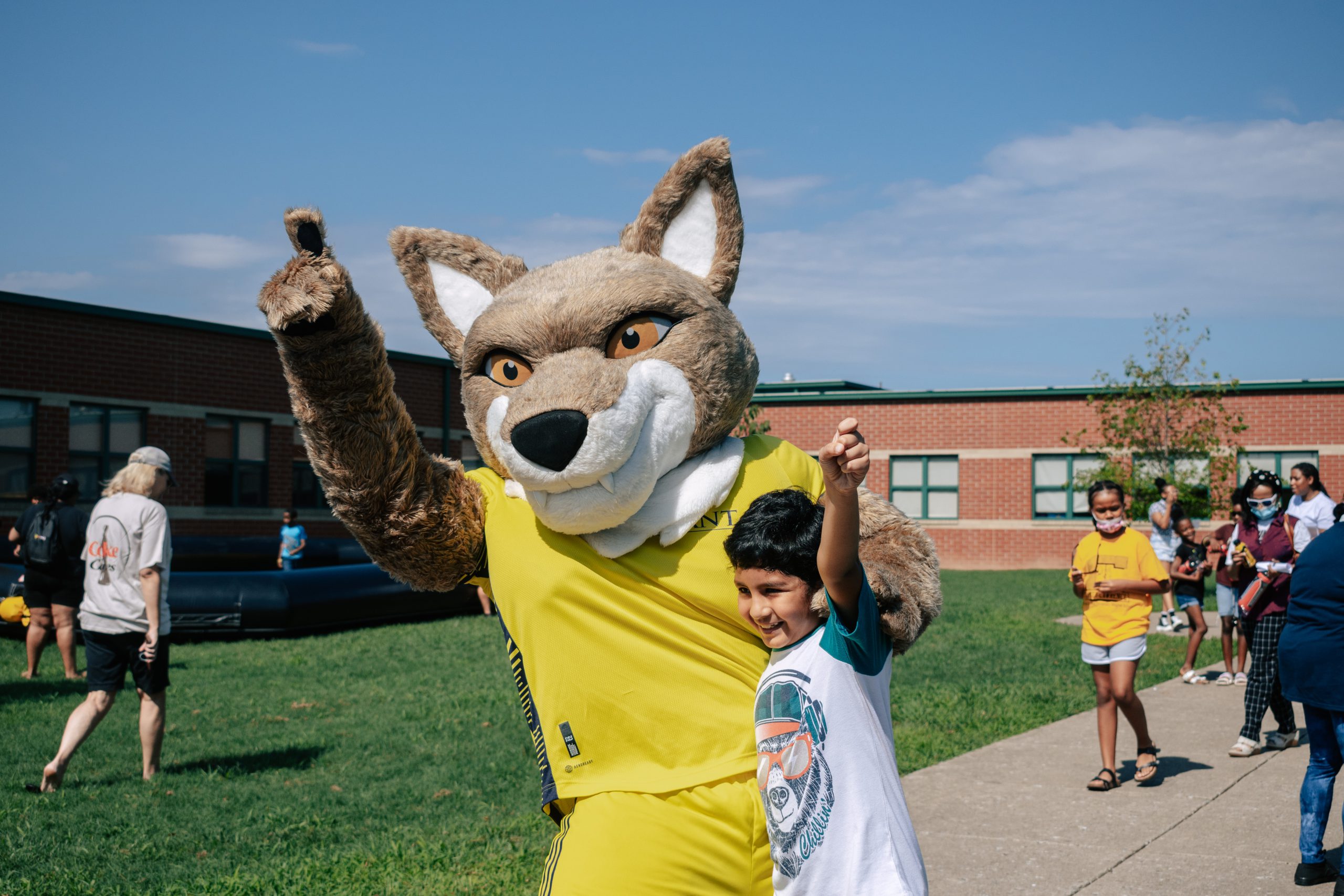 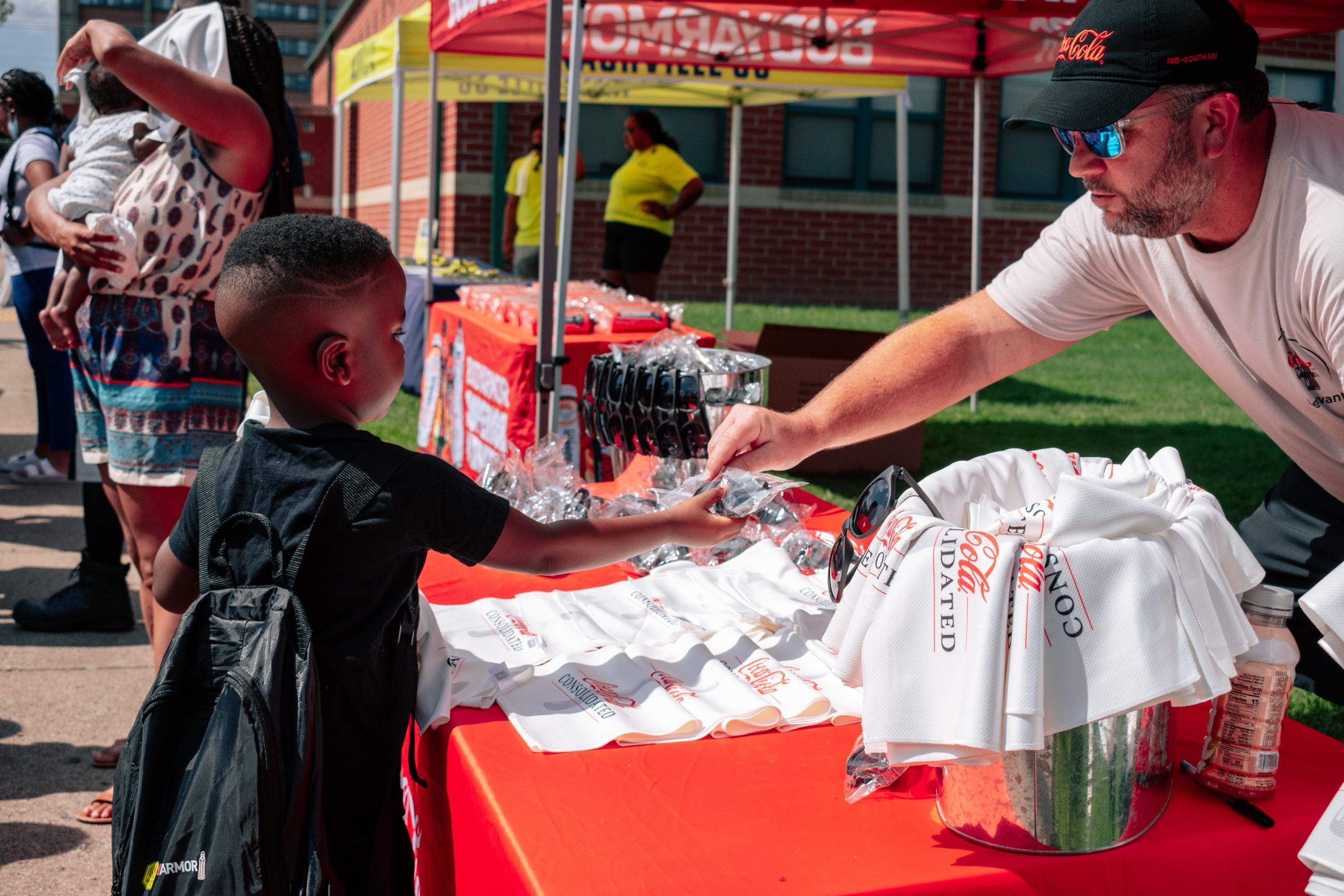 We teamed up with the Charlotte Hornets to serve Charlotte-Mecklenburg Schools teachers and students in advance of the upcoming school year.  Volunteers from both organizations, including our Chairman & CEO Frank Harrison and nearly 100 of our Company’s leaders joined Hornets leaders, including President & Vice Chairman Fred Whitfield and Hornets forward Gordon Hayward. packed over 2,000 backpacks and totes with school and classroom supplies on August 16 at Spectrum Center. The 2,000 student backpacks and 275 teacher totes were then distributed at four Charlotte-Mecklenburg Title I Schools – Devonshire, Hidden Valley, Oakdale and Sterling Elementary Schools.

“We are proud to join our partners at Coca-Cola Consolidated to help foster equity in education within our community,” said Whitfield. “Far too many students in our area don’t have access to the basic school supplies they need to learn. Similarly, so many of our teachers end up spending their own money to help their students. Our hope is that these backpacks and totes remove some of this burden from parents, students and teachers alike, and that they all have the basic tools they need to have a successful school year.”

This joint service project is part of the Charlotte Executive Leadership Council’s (CLEC) partnership with Charlotte Mecklenburg Schools to address key challenges impacting students. Frank Harrison along with Hornets Fred Whitfield represent their respective organizations on the CELC and both organizations have longstanding commitments to supporting Charlotte’s schools, students, and educators.

We extended our partnership earlier this year with the Hornets and Consolidated remains the team’s official and exclusive partner for soft drinks, water, bottled teas and juices, and has pouring rights for Spectrum Center concession stands.

“Our Purpose at Coke Consolidated shapes our culture and drives how we do business across our territory. Serving others is a key pillar of that Purpose,” said Frank Harrison, Chairman and CEO of Coca-Cola Consolidated. “We are grateful to call Charlotte home, and we share a strong commitment to promoting equity for all students. We are honored to partner with the Charlotte Hornets to provide students and teachers with much needed school and classroom supplies for the upcoming school year.” 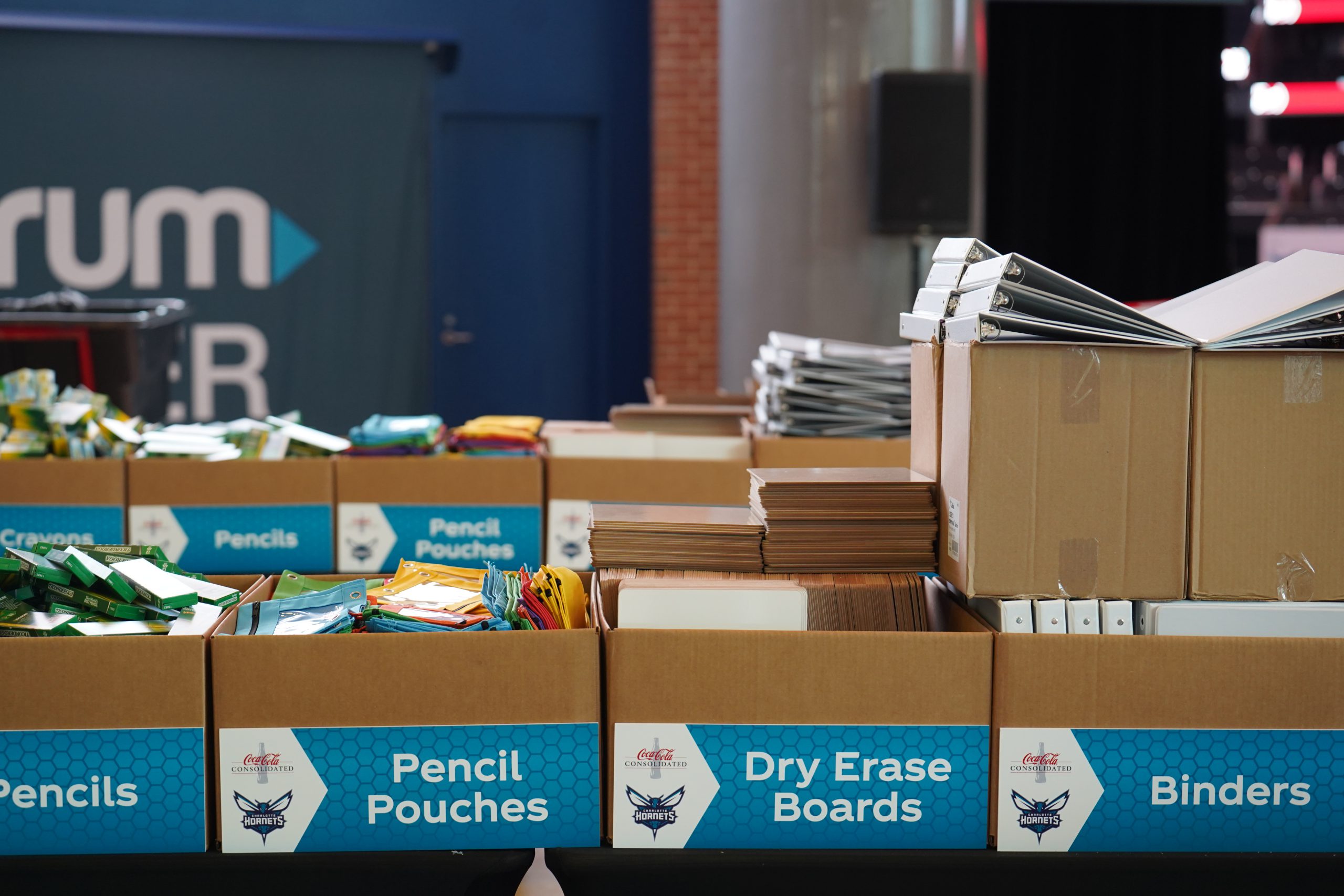 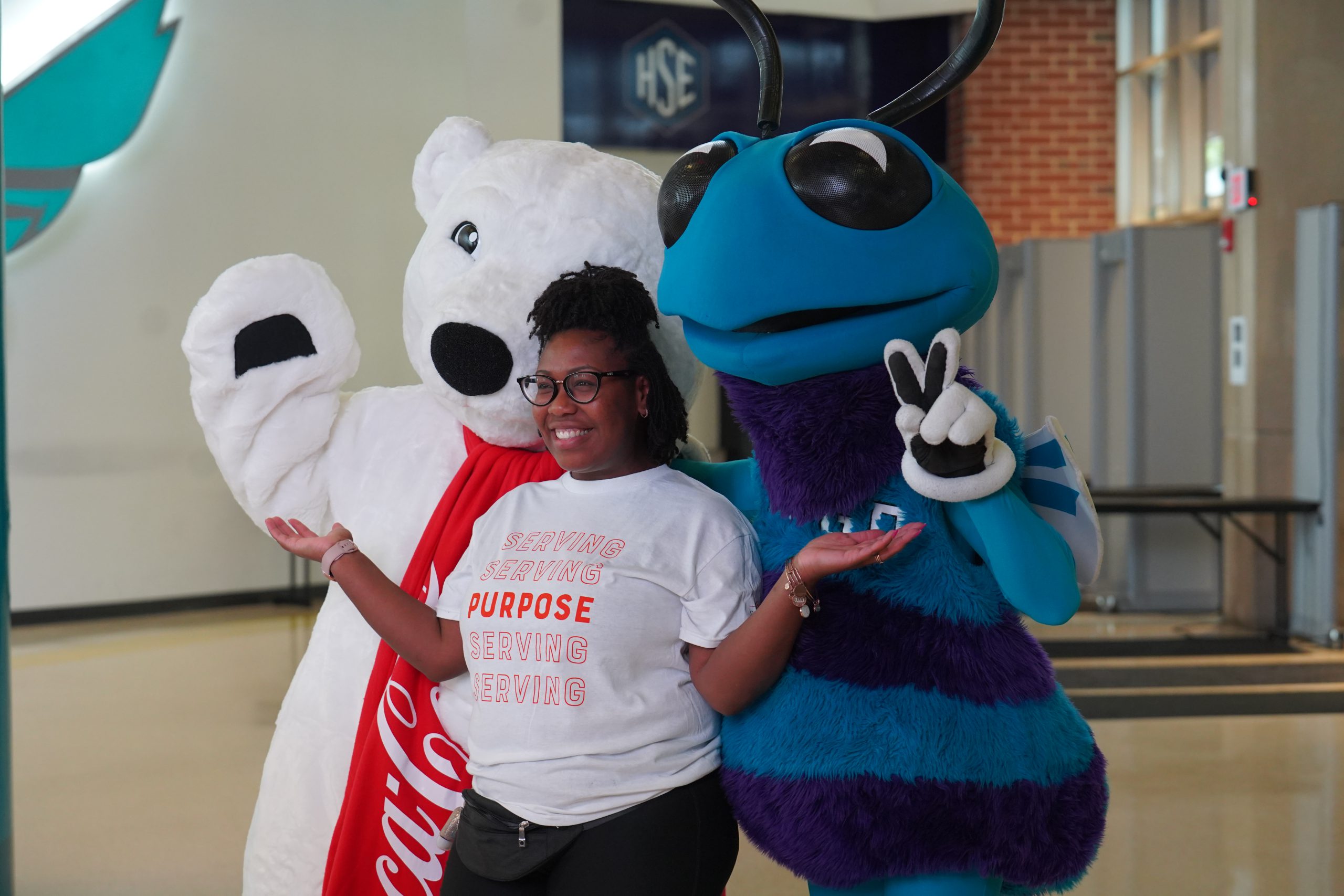 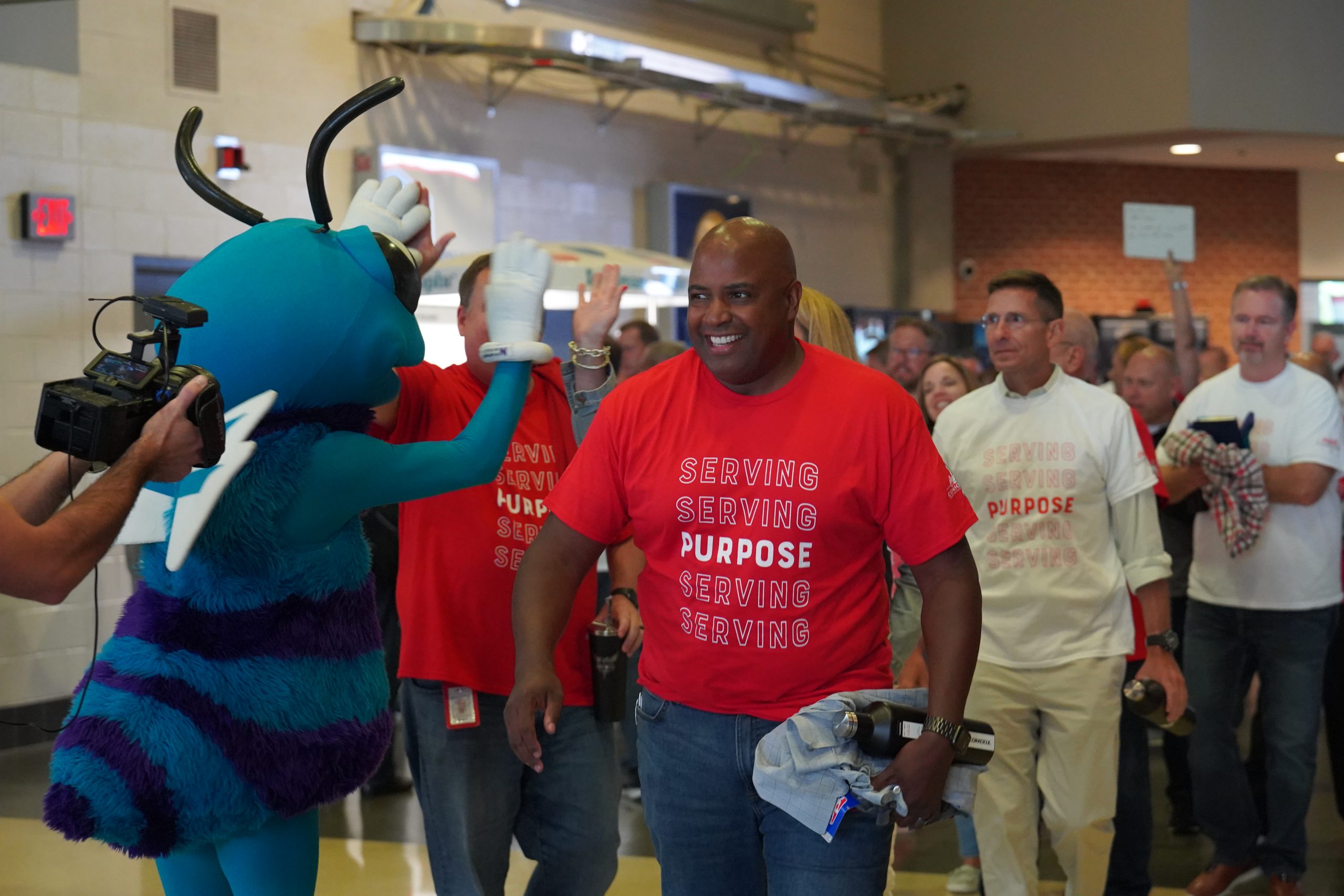 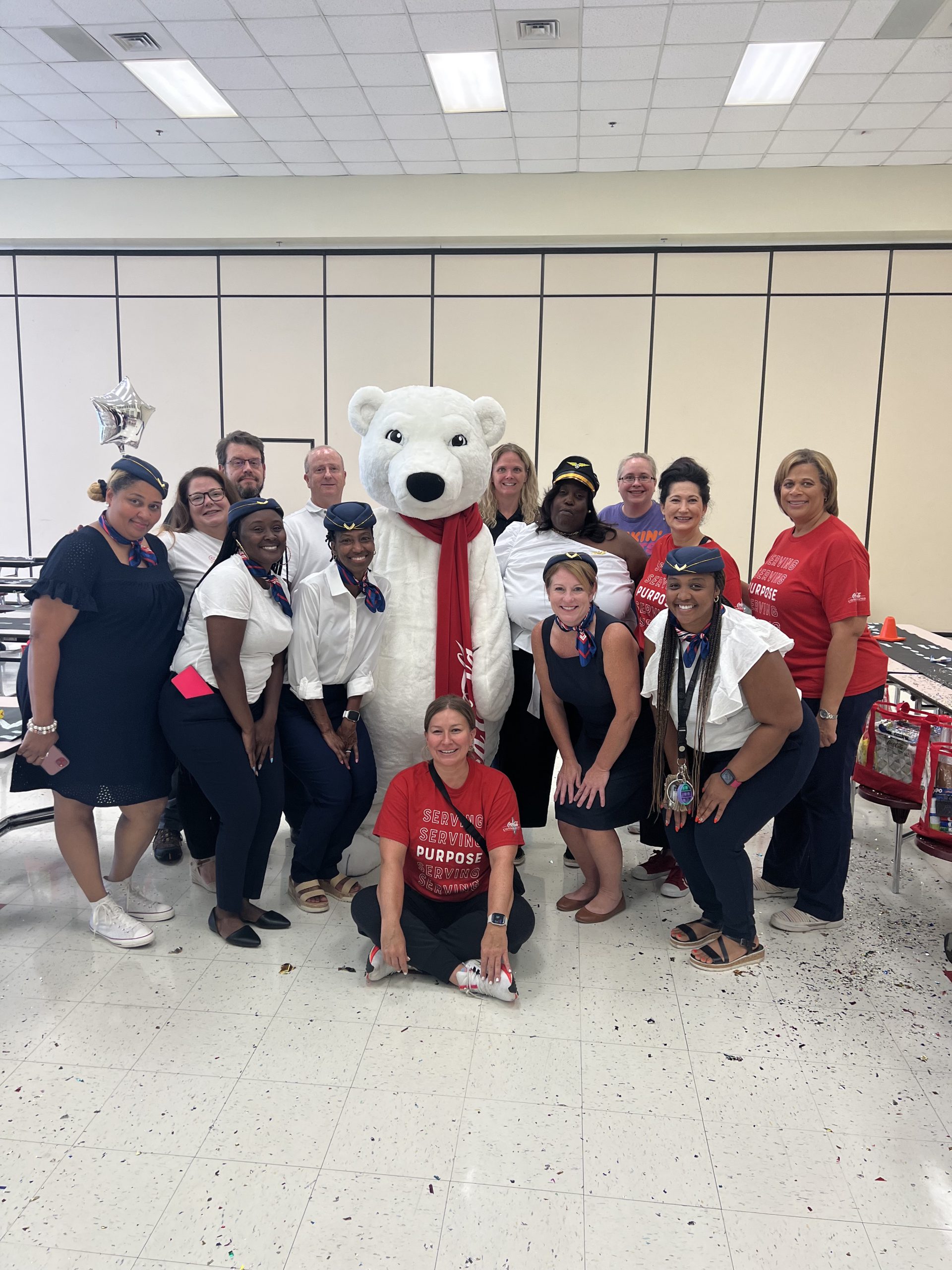 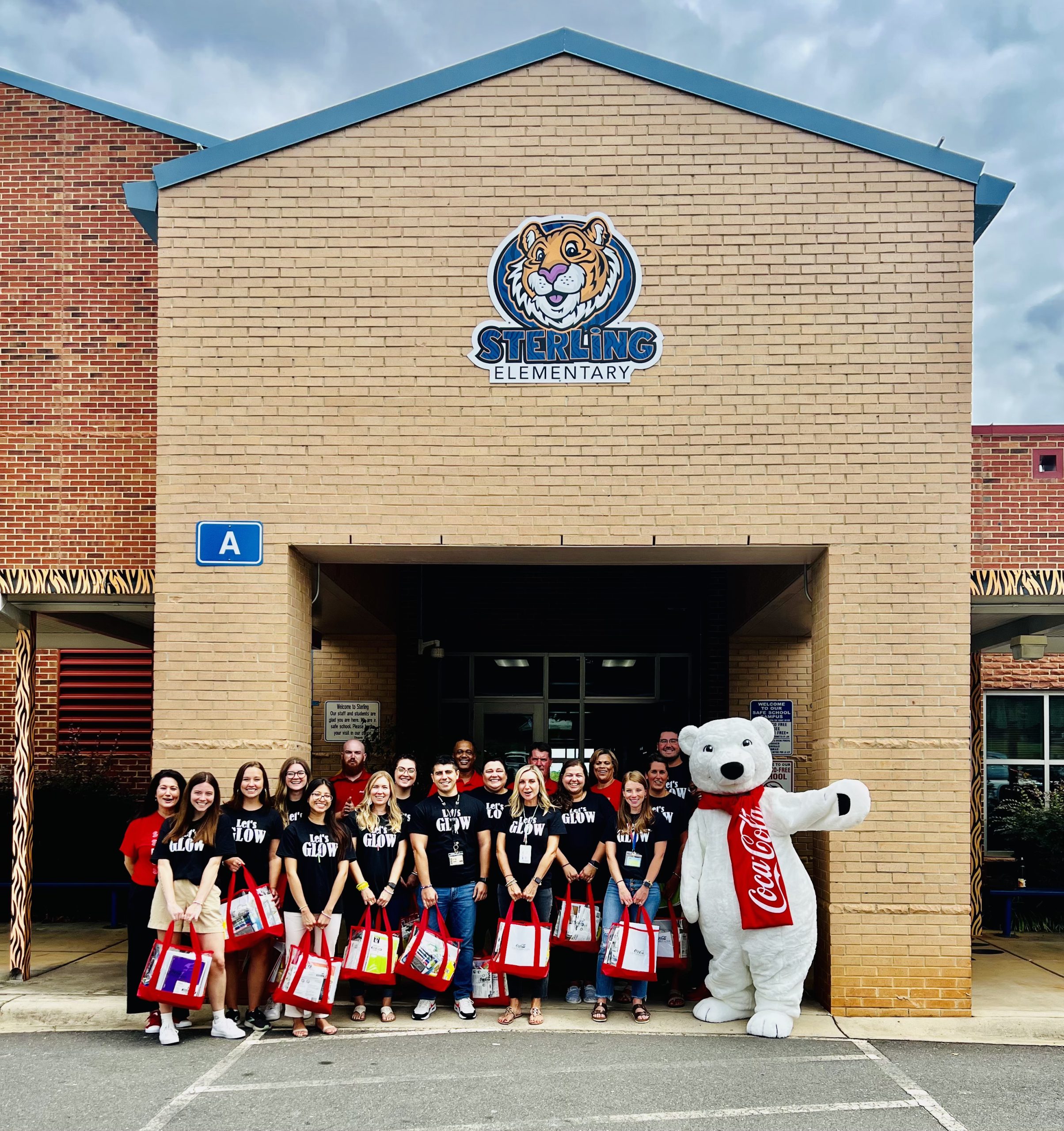 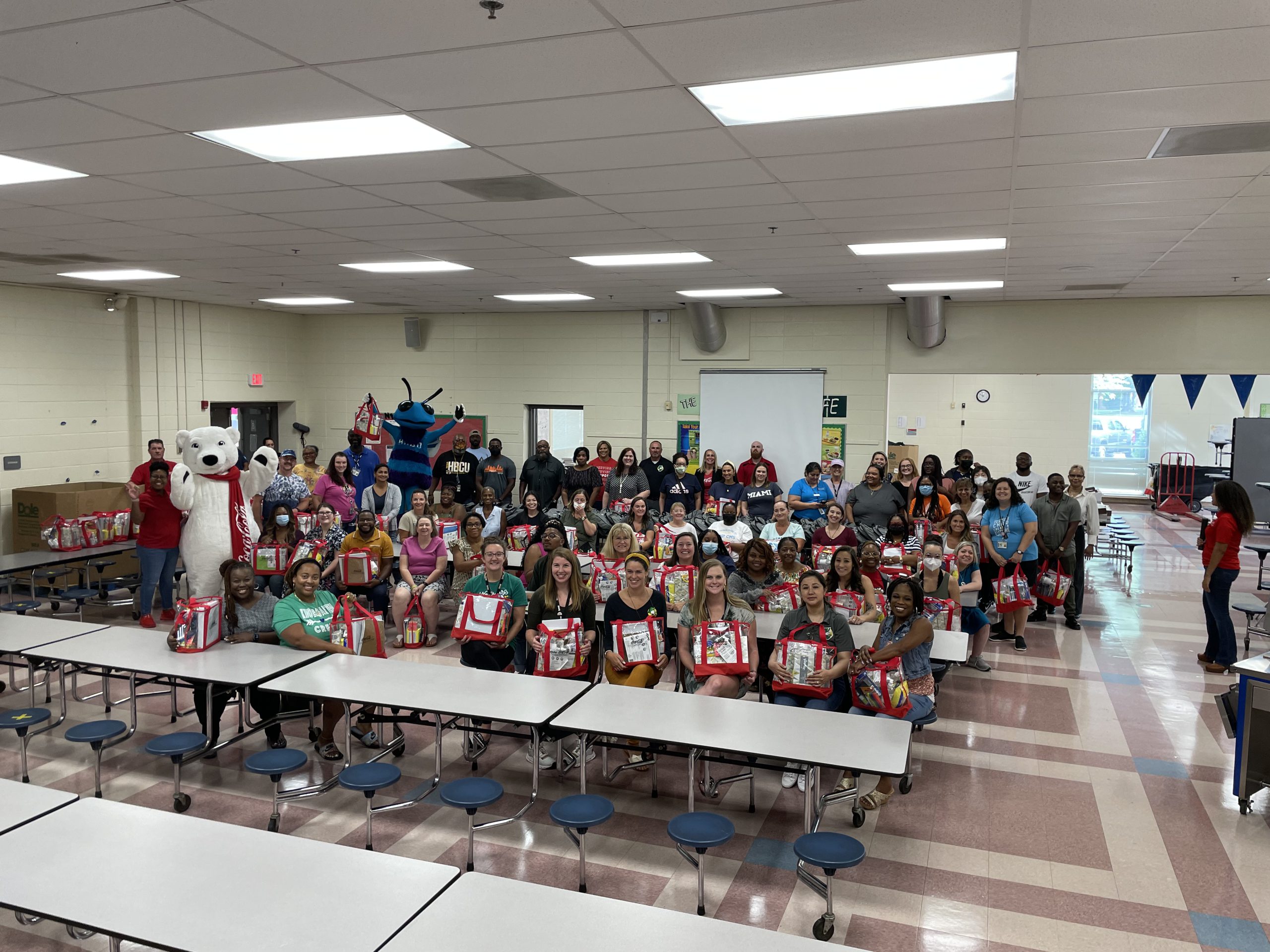 We teamed up with Kroger to host a drive-thru event to thank hundreds of Indianapolis’s teachers before the start of school. Teachers received supplies for their classrooms, a meal starter kit from Kroger and delicious refreshments. This is one of the many back to school events taking place across our territory. 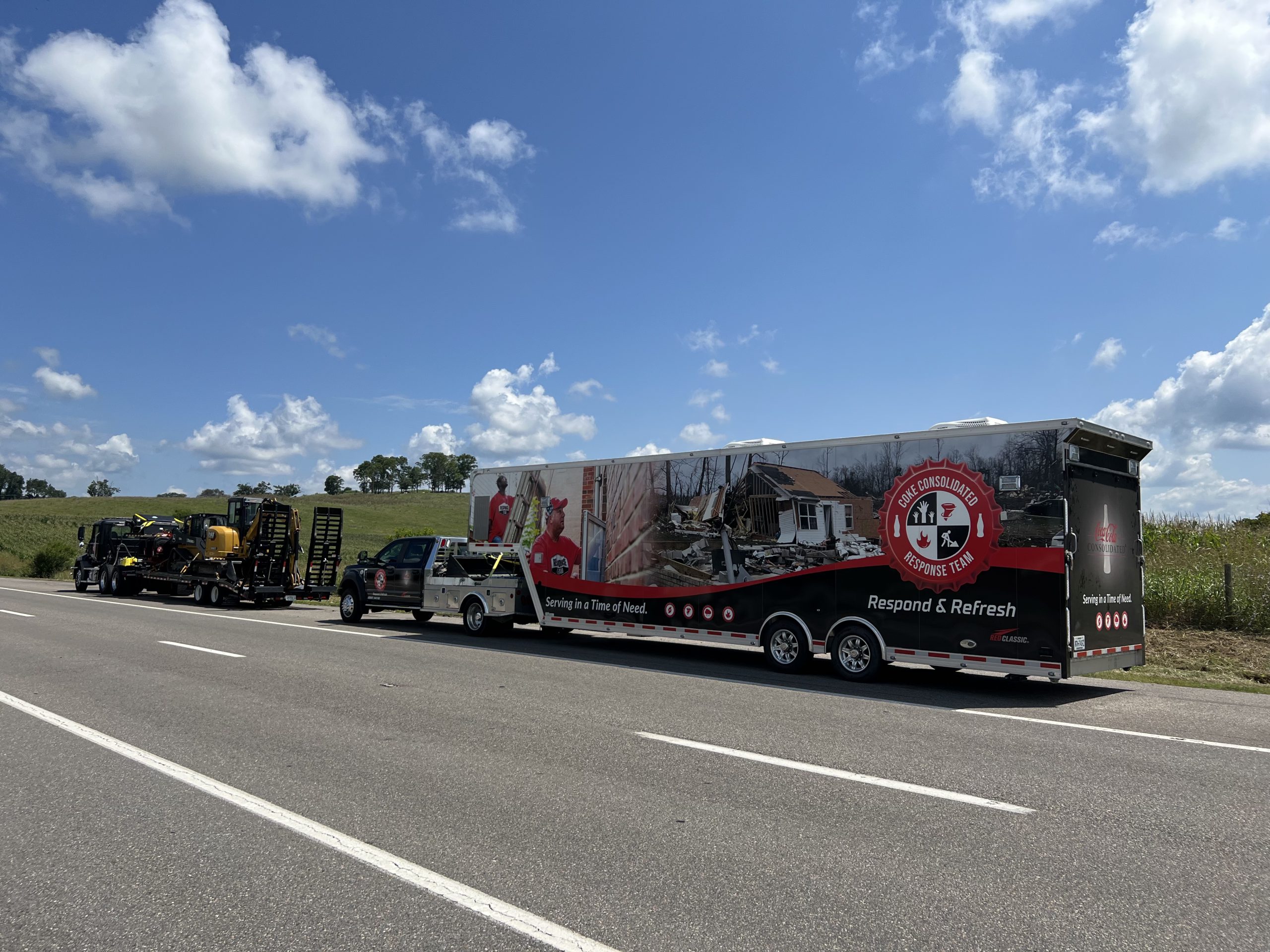 Coke Consolidated’s Response Team is on the ground in Kentucky and volunteering to help teammates and community members impacted by recent storms and flooding.

“We want to help residents stay safe and recover any way we can, whether it’s providing clean drinking water, clearing trees and debris, or just letting people know we care. We are praying for these communities and we’re here to serve them during this challenging time,” said Ellison Glenn, Coke Consolidated’s Market Unit Vice President and General Manager in Kentucky.

The Response Team provides  practical  support to those affected by  hardship and  natural disaster. Coke Consolidated also is supporting impacted colleagues through its Teammate Support Fund, which was created for teammates facing financial hardship immediately after a natural disaster or an unforeseen personal hardship.

Coke Consolidated also donated more than 64,500 bottles of water to local non-profits, first responders and hospitals, as part of larger efforts from across the Coca-Cola system.

The Coca-Cola Foundation, the philanthropic arm of The Coca-Cola Company, has awarded a $400,000 grant to help the American Red Cross provide food, shelter, essential supplies and critical emotional support to those left in need by the floods in Kentucky. Additionally, the company’s North America Operating Unit (NAOU) is contributing $75,000 to local nonprofit organizations on the front lines of the ongoing rescue and relief efforts.

Truckloads of beverages have been sent to first responders, hospitals and nonprofit partners including Good360 (which works with local state emergency agencies and other local organizations to source and deliver product donations that meet pressing needs) and World Central Kitchen (which mobilizes local chefs and volunteers to provide meals in response to crises), with more on the way. 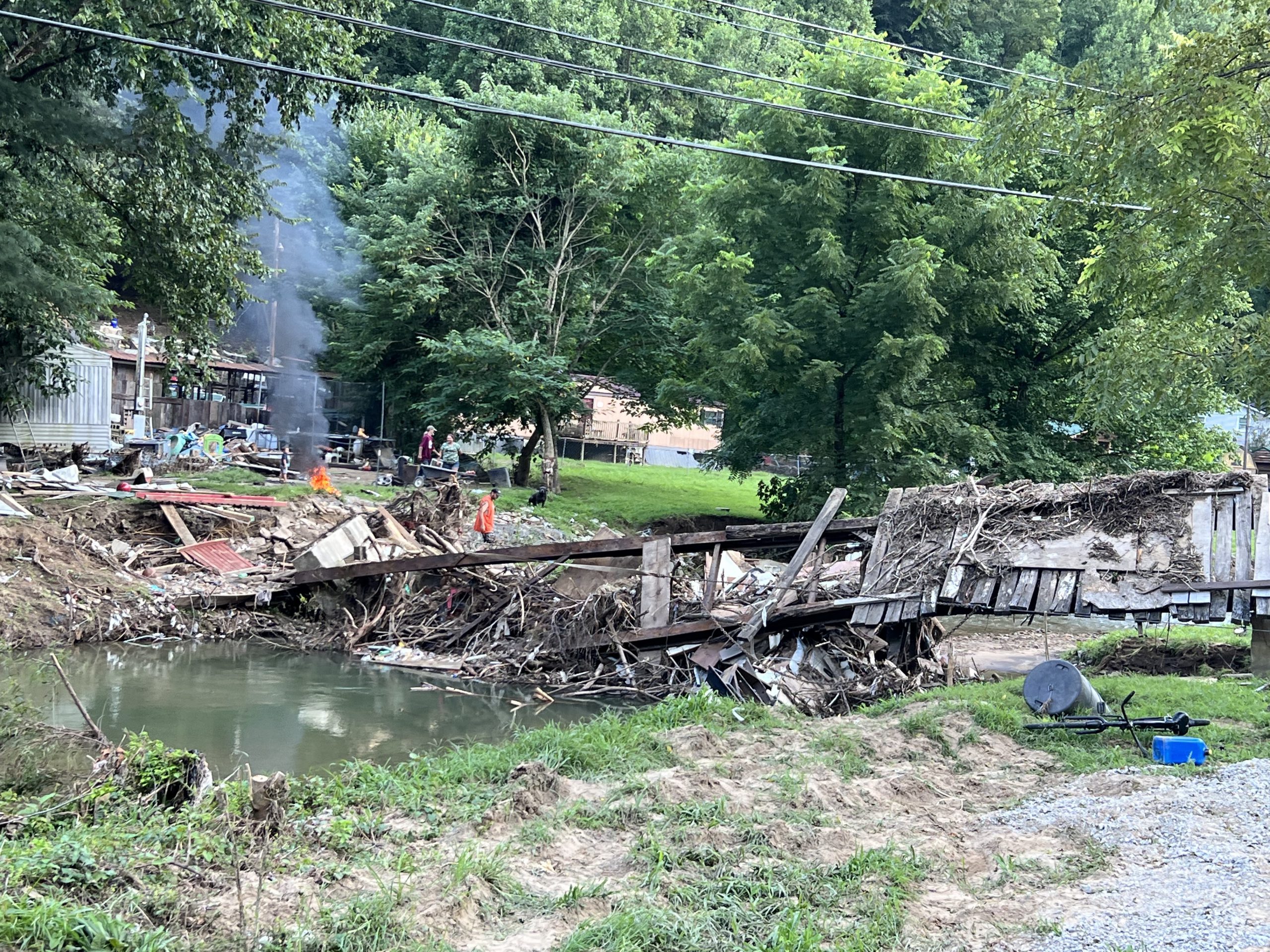 Coca‑Cola Consolidated, Inc. today reported operating results for the second quarter ended July 1, 2022 and the first half of fiscal 2022. Click here to see our earnings release.

Agreement highlights Phoenix as leading esports team in Southeast US

The Charlotte Phoenix will incorporate Coca-Cola branding on its jerseys and in the team’s streamed competition and gaming content.  As part of the agreement, the team’s headquarters will be outfitted with Coca-Cola branding, including a themed stage for esports competitions. Fans interacting with the team’s players and content creators will also have access to special product drops.

“We’re thrilled to partner with Coca-Cola Consolidated and look forward to integrating the full range of Coca-Cola and Coke Creations products into our world of esports,” said Jeff Zajac, Managing Director of the Charlotte Phoenix.

Through the partnership with Coke, Stay Plugged In will provide scholarship opportunities to high school students seeking to play competitive collegiate esports or pursuing educational opportunities that support the esports ecosystem. Over the past year, hundreds of students have accepted offers to play varsity college esports through the Stay Plugged In platform. The students received nearly $10 million in scholarship support.

“We are extremely excited about our partnership with Charlotte Phoenix and Stay Plugged In,” said Dan Holmes, Senior Vice President, Brand Marketing & Commercialization for Coca-Cola Consolidated. “We recognize the growing popularity of esports and gaming, and this partnership provides us with a great vehicle to reach this unique consumer base. Stay Plugged In is an incredible platform that provides talented students with the resources to reach their education goals, and we are proud to support its mission.”

The Phoenix participate in Rocket League, Apex Legends and the eNASCAR Coca-Cola iRacing Series. Fans can watch the competition on Twitch or engage with the organization’s new content creators which will be announced over the next few days.

About Stay Plugged In

Stay Plugged In is the nation’s leading college esports recruiting platform, enabling high school students to connect with college recruiters, showcase their skills and participate in educational and other opportunities designed to enhance the students’ marketability.  For more information about Stay Plugged In, go to staypluggedin.gg.

Coca-Cola Consolidated is the largest Coca-Cola bottler in the United States. Our Purpose is to honor God in all we do, to serve others, to pursue excellence, and to grow profitably. For over 120 years, we have been deeply committed to the consumers, customers, and communities we serve and are passionate about the broad portfolio of beverages and services we offer. We make, sell, and distribute beverages of The Coca-Cola Company and other partner companies in more than 300 brands and flavors across 14 states and the District of Columbia to approximately 60 million consumers.

As a longtime Textron Aviation customer and Special Olympics supporter, Coke Consolidated received the special “Dove 1” call sign and will be the first aircraft to land in Orlando. Kelsey, along with several other athletes and coaches, will be riding in style on Dove 1 as the first airplane of athletes to arrive at the Games on Saturday, June 4.

The Airlift is a signature community event organized and coordinated by Textron Aviation Inc. with assistance from owners and operators, industry partners and employee volunteers. More than 800 athletes and coaches from across the nation are set to be transported to and from the 2022 Special Olympics USA Games.

“It’s an enormous honor for Coca-Cola Consolidated to be named Dove 1 in the Special Olympics Airlift,” said Kimberly Kuo, Senior Vice President of Public Affairs, Communications and Sustainability at Coca-Cola Consolidated. “Our involvement with the Airlift supports our Purpose and Values — which include a deep commitment to serving others. We feel blessed to be leading this convoy of aircraft to deliver Special Olympics athletes to the USA Games.”

Coke Consolidated first participated in the 2006 event and this will be its fourth Airlift. Click here for more information about the Special Olympics Airlift and Dove 1 designation. 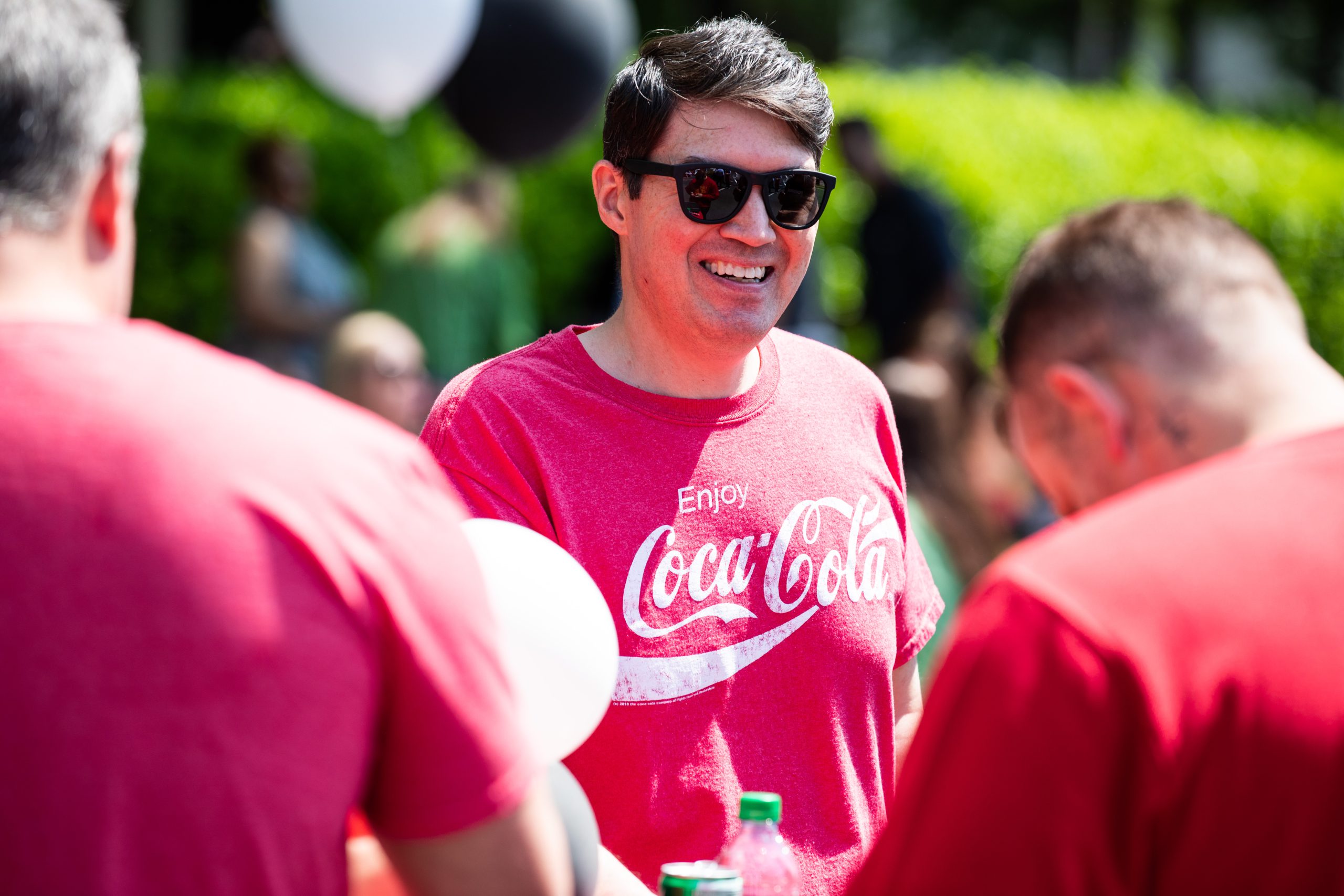 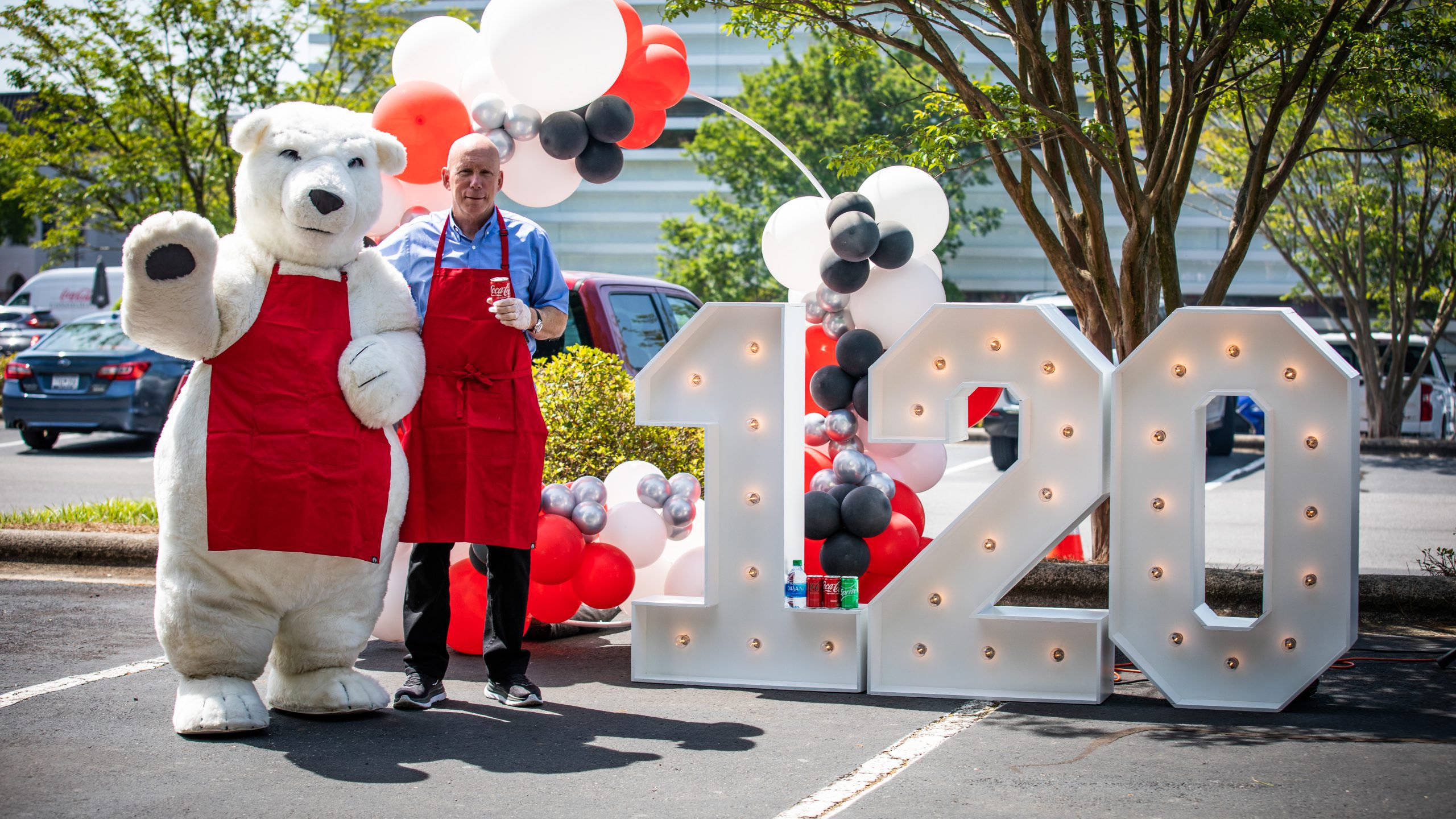 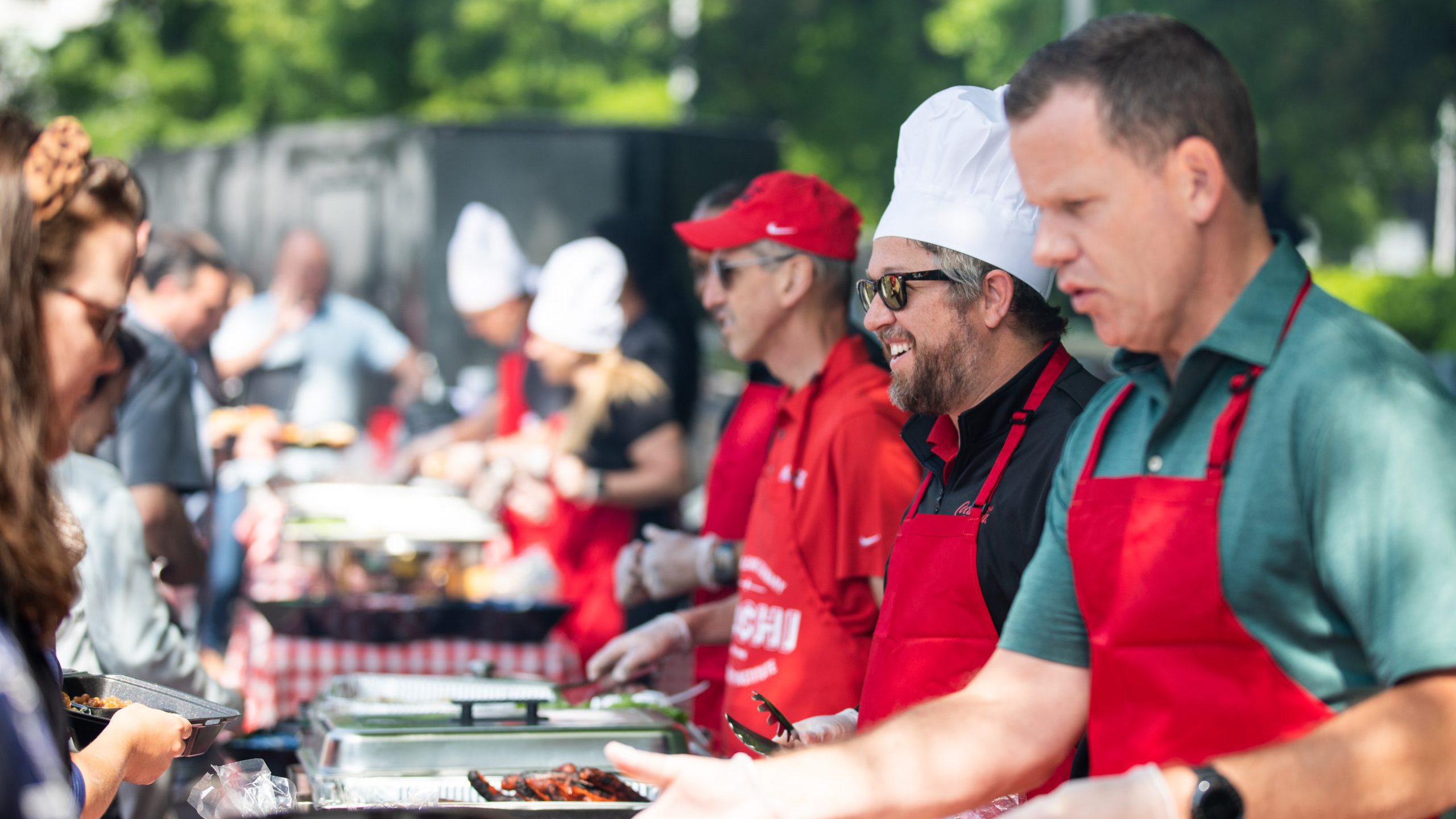